A colleague of mine at school recently revealed that he was making films, which is always lovely to hear, especially in the local area. He lent me a copy of his most recent work – ‘Neville Rumble’ a full-length, well-made film that has some great performances and a gripping storyline. I’m hoping I can get involved in some way for his next picture, even if it’s just previewing it.

Thank you Dirk Malcolm and the Dirk Malcolm Alternative Blog (http://wordpress.com/read/blog/id/13428146/) for your very kind comments. I hope everyone votes on the next challenge and keeps up with Dirk’s progress.

The short film is finished!

I imagine (and hope) it is not going to be as grueling as filming with Herzog, but I have decided to keep a diary of my last filmmaking adventure at Robert Smyth in homage to the diary style of Aguirre, God of Wrath.  Every year for the last four years Gavin and I, with the help of some very good people, have made a film during the summer exam leave.  This is designed to make me better at filmmaking so I can confidently teach it and to create useful resources when teaching filmmaking to the students.  I say all that, but really it is a way to have some fun, which we are unbelievably being paid for, during the weeks off teaching and because it really is the most amazing feeling when it goes well.  In previous years, we have made a music video, trailers, a horror scene, an example of continuity editing and and arthouse one shot film.  They are all available on my YouTube channel: http://www.youtube.com/user/hhurdley/videos

Anyway, this year we have decided to make a short film as it is something we haven’t done and we need one as a resource for the A2 film students.  Gavin has also had a bad knee for a while now and I thought I would base it on that.  We are looking for it to be three to five minutes long (to be honest, we’ll be lucky to get to three minutes) and we always like using foley in a fun way.  Last week I started to plan the story very roughly and today I storyboarded properly.  I was feeling a bit funny all morning and I thought a bit of drawing and planning would help my brain focus.  I am having problems with the concept of leaving Robert Smyth, even though I know I am ready to go, and doing this will help me have something to remember and concentrate on so I don’t start getting too emotional too early.

I’ve checked it with Gavin (although I don’t think he’s looked at it properly, I bet Klaus Kinski was exactly the same) and he seems fine with it.  It is a fairly lo-fi film and I think we should be able to film it within the next few days and then we can start working on foley and editing, which may take longer.  We are normally one or two take people and it isn’t going to require a huge amount of props.  I am obviously anxious about getting it finished before I leave!

Today we worked on the production of props and final organisation before we start shooting tomorrow.  For some reason I am quite nervous about starting filming, maybe because I know it means I’m closer to going.  I have figured out a shooting schedule and that always makes me feel calmer.  After work yesterday I went and got some travel cosmetic bottles and they have now turned in to this:

We started filming!  We have done some of the early shots of H Mann opening and receiving the letter and the title sequence.  I am having to do the filming, which is not my normal job and I have finally worked out about focus, which is a major breakthrough for me.  I just hope I have done it all right.  Gavin was not very Kinskiish, but he did seem quite nervous throughout the process.  He reckons he is not a good performer, but his acting of Eminem in the Lose Yourself video would disprove this. 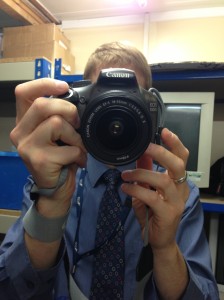 Today we made excellent progress.  Gavin wasn’t here during period 1 to go to a doctor’s appointment about his knee problem (this film is completely meta) and then I was buying plane and train tickets during period 2, with a whole saga about fraud and HSBC.  Anyway.  We then realised that we had periods 3 and 4 and lunch to work on it only and Gavin is away doing some community work tomorrow.  So, we suddenly shot into action. We filmed the entire rest of the film in three different location, with different costumes and fairly complicated props.  At lunch we even managed to start editing, pretty good progress!  I honestly don’t know what these proper filmmakers do with their time and money.  I also really enjoyed having a white coat on, I felt  it imbued me with some extra power. 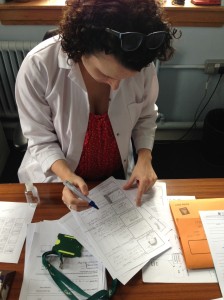 Next week we need to finish our editing and start work on the sound.  I will obviously post results when they are finished. 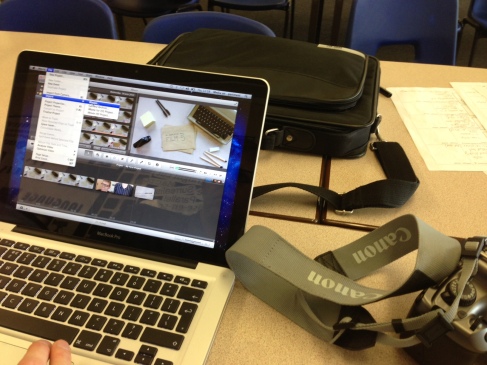 It was pretty uneventful really, I’m certainly no Herzog, but Gavin does have a few Kinski tendencies… Unfortunately, he has to do some outreach work tomorrow with dementia sufferers, so we can’t get any further.  So selfish!

The ‘book’ is finished and other news.

I don’t like writing.  I think I have made this clear before.  But, for some stupid reason, I got talked in to writing a novel/novella/short story/pamphlet for November/first week in December.  I always like creativity, I always like to join in and I always like to finish things.  This often leads to stress and furious, frantic tapping of the keyboard.

Although I really don’t think I’m good at writing – like at all, I did enjoy the creative process.  I liked the initial thinking of ideas and I enjoyed the structuring.  I probably also would have enjoyed it a lot more if I didn’t have to do it at the same time as working during the busiest term of the year, having an observation week and feeling generally run down.

StuMo hasn’t finished.  He was the one that talked me into it in the first place.  Not impressed.

Anyway.  Doing that, along with a full-time job, did take up most of my free time, but I haven’t stopped doing film related stuff altogether, obviously.  I have started reading the Jack Cardiff autobiography that Uncle John gave me, which is enjoyable, if a little light.  My gorgeous friend Nat also came to stay a couple of weekends ago and gave me a great book on the representation of history in cinema.  While she was up we also did a bit of old book shopping (it helps to live above a second hand bookshop) and I bought a book about Mayer and Thalberg and a 1930s history of cinema.

Looking forward to this lot…

As a side note, I have also booked tickets to see 9 to 5, the Dolly Parton musical with Madkin – too excited.