A One and a Two is a Taiwanese film released in 2000 . It was produced and written by Edward Yang. I have never seen a Taiwanese film before and so this top 100 list is already helping me see a lot of films from amazing places.  It shows one of the most impressive powers of film in that I am able to see different cultures and lives and it inevitably makes me realise that I should travel much more! 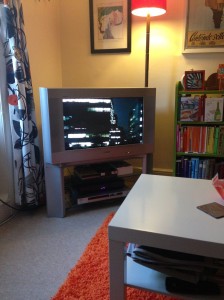 I had researched this film a little before I started.  It is the youngest film I have watched so far and when it was released it received plaudits from Cannes and Cahiers du Cinema among many others.  However, when I first started watching it, as I came in from work on Friday, it seemed initially quite cheap, maybe shot on video and the domestic setting made it look like a fairly low-budget TV soap.
However, as you got involved in the nearly three hours of story-telling, it was heart-breakingly moving and had unforgettable performances.  It is told through three characters from the same family: NJ, the father, Ting Ting the thirteen year old daughter and Yang Yang the eight year old son. They are all so engaging and rounded.  Yang Yang’s expressions are so infectious and his interactions and questions with the the adults are adorable.  His little unexplained adventures lend a softer, humourous side to the film that is necessary and I always love a child with a camera, especially as he is taking photos for a very benevolent reason.  Ting Ting’s story of first love is so movingly acted and when NJ is finally able to express his feelings that have clearly been eating at him for thirty years, the quiet heartbreak  made me cry – stoic men always get me.
Throughout there is a brilliant use of parallelisms between all the stories.  These are shown in graphic matches, but also through the brave use of reflections and windows that gave a shiny, but untrustworthy quality to the film.
This is the first film on my list that I have watched since I got my new job.  I am now going to be Head of English at another school, so will no longer be watching these for my teaching self-esteem, but to enjoy them as a hobby, as they always had before.  I think with this new even more demanding job, I am definitely going to need the distraction!  This is also the last 93rd film – I can start watching the 90th films now!
Creative:
Something with reflections and lights – a photo.
Using family – I am going to visit my family at the weekend, so I could easily use them and maybe combine the reflection.  Possibly a film or still image.