Un Chien Andalou (1927) by Bunuel and Dali is a shocking, challenging and confusing watch.  I have taught this film at least three times and probably watched it twenty times so it is difficult to create an independent response and remember how I initially felt about it.  I actually used this film today, along with some art by Picasso, to explain Modernism, before we started learning about Post-Modernism.  It’s all high-brow around me don’t you know!  It isn’t a film I would watch this regularly if I didn’t teach it, but I definitely appreciate its place in the canon.

Watching it in class this afternoon

I really love watching this film with students and have used it as part of the showreel to sell film studies this year.  It quickly got around school that I was showing the most disgusting clips, which surely can only help!  The student reaction to the eye-cutting sequence is brilliant.  The most hardened horror fan will still squirm when the eye is cut in to.  I don’t think they expect it to really happen.  It’s amazing how quickly people forget that film is a construct and that it can’t really be happening.  On the viewing this afternoon one of my students sat open-mouthed throughout the entire thing.  Perfect.

Obviously, I love the initial eye-cutting sequence and all its references to the hypnotic and damaging power of mainstream cinema.  I also love the close-up on the beach sequence where the man’s hand is held up next to her face and she seems to stare at his watch.  However, my favourite sequence is the one that Dali seemed to be most in charge of.  I love the male character trying to drag the two pianos, two priests and two dead horses.  It’s such a perfectly visual image and I would love to imagine what it would look like in colour.  Although I love the grainy black and white generally, it’s nice to imagine this as a Dali painting. 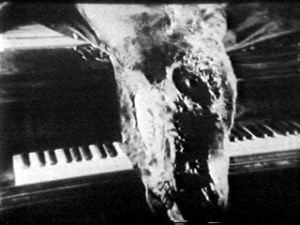 This short film is clearly about a break with narrative structures and no matter how often you try to suggest to a class that there isn’t a clear plot and the narrative is deliberately confusing they won’t have it.  I love how it plays around with time, including the intertitles that say ‘eight years later’, ‘in the spring’ in an illogical way.  The changes in tempo are dramatic and unnerve the spectator, clearly a plan.

A close-up on the eye.

A short film that disrupts time and place.