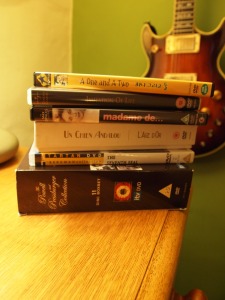 Which one to start with…?

I started off my top 100 film list by watching ‘Madame De…’ a lush and regal 1953 French film directed by Max Ophuls.  It was the perfect choice for a Saturday afternoon and told the story of a Parisian coquette (played by Danielle Darrieux) who sells her husband’s earrings (Charles Boyer) as she is in debt.  We then follow the earrings as their owners get entangled in affairs, deceit and desire.

Throughout the film there were numerous long tracking shots that involved complex camera movement and the use of focused lighting. It gave it a lovely musical quality, it had an innate choreography that was most clearly demonstrated in an energising waltz montage.  The camera and two main characters (Darrieux and Vittorio De Sica) are continuously spinning round each other, they have a force that will inevitably lead to the tragic resolution.  I have discovered after researching the film that Ophuls had been a musician and he used to script a tempo to each scene of the film.

This lightness of touch continues with the amount of adult content that is explored in a delicate way.  We have mistresses, gambling, debt, heartbreak and I love the way they are all treated with ease.  There also seems to be a lot of parallels througout the narrative that give it a lush, formal feeling (to match the incredible rococo mise-en-scene).  The train departure, the earrings as a gift, both men wanting her to come back, being injured or feeling pain in her and his heart and feeling irritation about her suitors.   The dialogue is equally sparse and precise, but contains some lovely, philisophical statements that discuss the human condition.

The most impressive scene for the economy of story-telling, something I think modern films have often lost, is the scene where Darrieux and De Sica meet.  It is in a customs office and in only four shots we find out what he does (an ambassador), realise he is interested in her, they acknowledge each other and she leaves.  The camera movement does all the work and they exchange no words.  A masterly sequence and an example of how tightly crafted the whole film is.

I loved Darrieux’s performance.  She went from a frivolous coquette to a tragic heroine in ninety minutes.  I loved her taut, composed face with eyes that showed desperation.  Her scenes during the affair were well done and I loved how she said ‘Je vous n’aime pas’ over and over, while clearly expressing the opposite.

I was interested in the suggested critique of the church.  Her futile prayers were another parallel througout and I liked the fact that her cursed earrings were left to the church as the final image.

Details of viewing: 6th October, 5pm, on my own at home on DVD.